Structure and orientation, transparency and openness

Lycée Belval – a secondary school for 1,500 pupils and 200 teachers – was built in Parc Belval, which connects the future residential areas with the Square Mile. The result is a building whose quadratic form and clearly defined structure offers the pupils not only a sense of security and orientation, but also a high degree of transparency thanks to the intelligent use of materials, light and open space. The educational concept behind the secondary school, which not only conveys solid basic knowledge (structure and orientation) but also fosters autonomy, individual responsibility and an open feedback culture (openness and vision) is thus reflected in the architecture of the building.

Lycée Belval – in harmony with its surroundings

The architectural concept involves minimising built-up areas in favour of green space, with particular emphasis placed on ensuring that the secondary school is properly integrated in the surrounding parkland.

Four square building wings are grouped around the school’s central, inner courtyard. The outward-facing sides of the buildings are flanked by differently landscaped areas that form a smooth transition between the school and parkland. Since much of the space concept takes the form of a garden level that extends below ground level, the new building – despite covering around 40,000 m² – does not appear overwhelming in scale. The various school areas are distributed across four storeys. 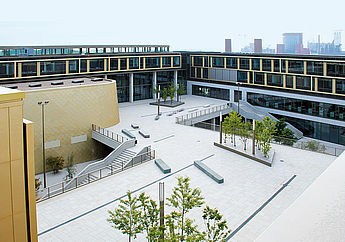 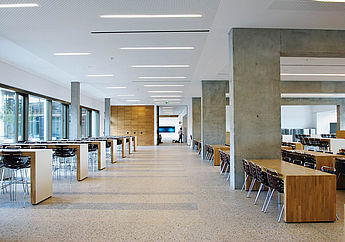 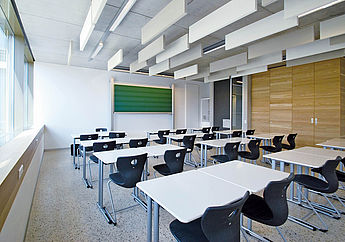